Khanty is a Uralic language. When Europeans hear of Uralic languages (or Finno-Ugric languages, which constitute a subfamily of the Uralic), they immediately think of languages such as Finnish and Hungarian, ie. the big Uralic languages with numbers of speakers amounting to millions. However, not many people know there are also other, smaller, Uralic languages, which have no official status. They are mostly spoken in the Russian Federation and are considered to a greater or lesser extent endangered. Khanty is one of them. Ethnologue.com classifies it as ‘in trouble’. To see what this means and to learn more about the situation Khanty, read Ethnologue language cloud report for this language on http://www.ethnologue.com/cloud/kca.

Endangered languages can demonstrate different levels of endangerment. Some are vulnerable to endangerment, whereas others are already on the verge of extinction. Learn more about different aspects of endangerment from the Book of Knowledge (Chapter 8).

Search for Khanty on the Interactive Map and discover genetic relationships among different Uralic languages!

This site: http://www.sever.eduhmao.ru/info/3/4502/ contains issues of Хантыясанг–– a newspaper in the Khanty language

http://uralistica.com/ – a Finno-Ugric social network (in Russian and Finno-Ugric languages) 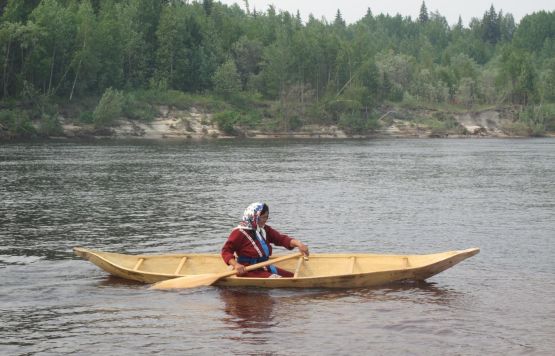 Photo: A member of the Khanty community Margarita Akhimova in a traditional dugout canoe. © Zsófia Schön 2012