Taa (also known under the name !Xóõ or !Xuun) has about 500 speakers in Namibia and about 4000 speakers in Botswana (source: DoBeS Taa project). Not all of these speakers are really fluent in the language, and more pessimistic estimates give the total number of speakers as 2000 or 2500 (see http://www.endangeredlanguages.com/lang/593). Taa belongs to the Tuu (or Southern Khoisan) group of languages, which traditionally are grouped together with other languages as Khoisan languages. The examples in this package show the West !Xoon dialect spoken in Namibia.

“Even though children still grow up with Taa as their mother tongue in some places, the language is highly endangered. This is due to the low socio-economic status of Taa speakers in both countries, the multilingual settings in which they live, and the lack of teaching materials.” (DoBeS Taa project)

Among linguists Taa is famous because of its enormous inventory of phonemes: it distinguishes more than 80 consonants (the exact number differs according to different theories and interpretations), including clicks, and 20 vowels. It also uses two tones (high and low). Read more about the sounds of language in the Book of Knowledge (Chapter 4).

Find more examples and exercises on the Interactive Map!

Further information on Taa and resources: 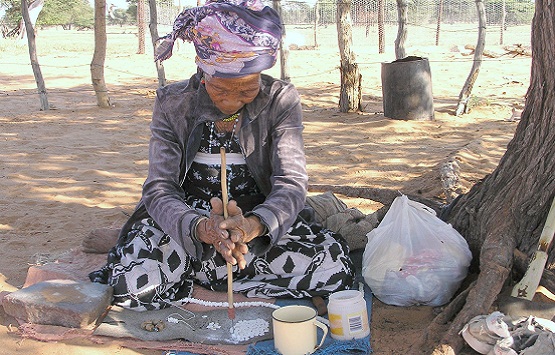 Photo: Gertrud Boden, DoBeS Taa project. <-correct photo will be used when re-sent by the section author, the one sent with fiszka wouldn’t open