Home > What can you do? > Keep languages alive

When I first met Loren in 1982, I said something like, “Glad to meet you.”
Loren responded with a stream of Tolowa and then said in English, “How do you do?”
“Gee, what was that you said before?” I asked.
Loren spoke in Tolowa again and explained, “I’m learning to speak Tolowa, and so I try to say everything in Tolowa first. Then if I don’t know it, I’ll ask one of the elders next time I see them.”
Loren speaks this way to friends, family, and strangers for several years. Now he speaks Tolowa fluently. One of the reasons that his technique of self-teaching is so ingenious is that he has created his own immersion situation.

Note: Tolowa is a native American language spoken in California and Oregon.

You may not have the opportunity to immerse yourself as totally in the endangered language you are interested in as Loren was able to, but if you live in an area where a minority language is still spoken, there are some practical steps you can take to help keep it alive. Hinton, Vera and Zeele (2002: 29-37) suggest the following activities, among others (see their book for more details):

Perhaps you can think of your own personal activities to keep your local language alive?

New media – new chances
Endangered languages have become popular in social media such as Facebook and Twitter. Thanks to these new media, people can communicate in a language even if there are only a few speakers and they live far apart from each other. Find out about tweets in not-so-common languages at the site indigenoustweets.com!

Watch a short clip to see what is being done to keep alive one endangered language, Lemko, in Western Poland (subtitles: Michael Hornsby):

And here the singer Isamu Shimoji, a speaker of the endangered language Miyako, talks about what he is doing to keep this language alive and why this is important. You can find the original recording on youtube, and here below you can watch it with English subtitles (film created by Patrick Heinrich, translation: Aleksandra Jarosz):

The American company Thornton Media, Inc. produces applications for devices such as iPad or Nintendo DSi that are designed for learning and teaching indigenous American languages. Here you can watch one of their (commercial) clips that demonstrates an iPad application for Cherokee, while in this clip teachers of Blackfoot talk about their language and how they use the Nintendo for teaching it to children.

For the Australian language Iwaidjan, an application for smartphones and tablets has been developed that supports the use and the documentation of this highly endangered language. You can listen to phrases and look up words, but also add new material by recording speakers or enlarging the dictionary. Read more about this project in this blog post by the linguist Bruce Birch. 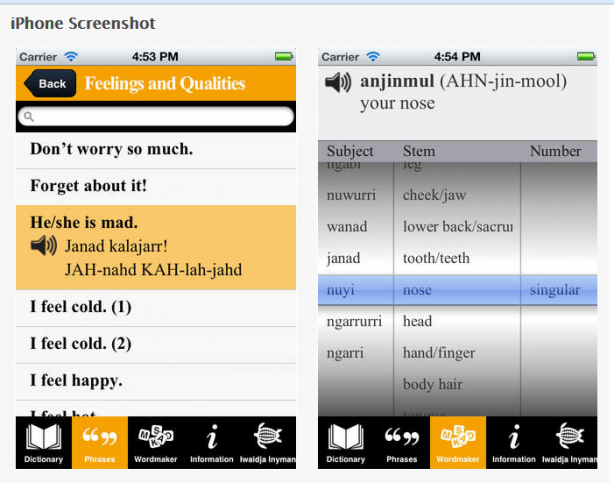